Like many of us across the country, you may have reduced business due to the restrictions in place while we tackle the Coronavirus. That doesn’t mean the time has to be spent being unproductive, it’s time to get those jobs done that you’ve been meaning to start but just haven’t had time for in normal business. Maybe that’s clearing out an old office, or sorting your archive cupboard, or maybe even disposing of redundant products. Now is the time to get those jobs done that you keep putting off, so you’re ready to bounce back once this is all over. And to help you during this process we’ll act as a single point of contact for all of your waste disposal needs, so you don’t need to waste time finding different companies, you can focus on clearing out your workspace.

Can you really collect all types of waste?

Our clearance teams are on hand to safely collect and recycle pretty much any type of waste product you have, but if you’re unsure what type of waste we’ll collect, here is a list of common items we remove from clearance jobs. Don’t worry if your items aren’t on here, get in touch with us and we’ll try our best to help!

Pallets – you can download our helpful resource on the types of wood pallets here.

Cardboard and Paper – Do you produce cardboard on a regular basis? Find out about our cardboard collection service here.

The waste industry in the UK is having a difficult time, global markets have driven recycling revenues down, tax increases and levies threaten disposal routes, and the uncertainty of the market post-Brexit has all added to an already struggling market.

It has been well publicised how the world’s doors have closed to UK exported waste and recyclable materials, being at the forefront of sustainable solutions has been harder to keep up with than ever for UK businesses over the past 12 months.

Government Taxes over the past 10 years have increased the strain on disposal costs, and a serious shortfall of infrastructure capacity of UK based waste to energy facilities are being blamed. The UK government are licensing more power plants than ever before, but ultimately, is it too little, too late? I guess we will have to find out.

The changing situation in the UK and the EU

A large percentage of the UK’s 32 million-plus tonnes of waste produced each year is sent for recovery through energy from waste plants. The UK has a small number of plants however, plants in Northern Europe are used to process waste into energy. Some countries in Northern Europe have now implemented additional taxes for plants turning waste into energy, these incineration taxes have impacted on UK disposal routes gate fees.

Recycling rates for the UK’s cardboard and paper have dropped by as much as 70% in 2019, as demand for our recycled material dried up, without new licenses being issued and recyclers opening their doors to the UK product, we can expect yet more reductions. Some parts of the UK have already seen rebates totally dry up, and some businesses are being charged for the removal of cardboard. Specification for recyclable cardboard has also increased during the last 12 months, putting pressure on recycling facilities to improve the grades of material they accept and process. 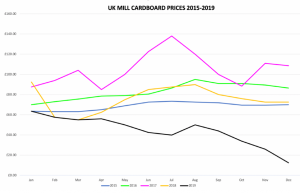 Helpful articles for you

We have done our research and put together a list of the articles we think will be the most helpful to you:

Working through the worst of times (for cardboard recycling)