Fly tipping is the illegal dumping of waste onto land, including being tipped on a site with no license to accept waste, instead of using authorised methods such as kerbside collection.

Fly tipping is bad for the environment, it spreads diseases and encourages vermin, and the earth could absorb toxins leading to the prevention of future greenery growth. It’s bad for wildlife, household goods could contain substances which potentially can kill a wild animal if it gets ingested, or they can get entangled in plastic which can lead to suffocation or strangulation. And, it gives communities a bad reputation as being run down or dirty.

The Solar Centre have looked at 59 cities across the UK and ranked them against 10 key eco-friendly metric, we’re going to focus on fly tipping to identify the worst and least fly-tipped cities.

With a score of 0/10 the worst fly-tipped city is Plymouth, according to Plymouth Live, “A third of all reported incidents of fly-tipping in the South West, for the financial year ending in March 2019, came from Plymouth. Statistics released by the Department for the Environment, Food and Rural Affairs (DEFRA) showed that 59,334 incidents occurred, 19,622 of which were in Plymouth. That number is up from the 13,953 incidents from the previous year, an increase of more than 40%.” Closely followed is Southhampton, and Leeds. 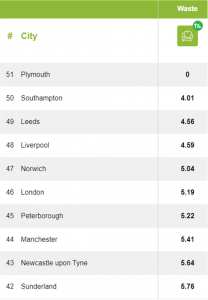 Scoring a perfect 10, Chester is the least fly-tipped city according to The Solar Centre, closely followed by Chelmsford and Bangor.

What to do if you have waste you need to get rid of?

We can provide a wide of services to suit you and the waste you have, from skip hire to on demand waste collections, to pallet collections, we can help. All you have to do is get in touch with us on 0115 896 5460 or click contact us below, and we’ll do the rest.